Flies of the Month 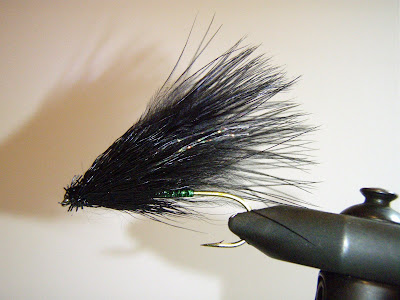 I am already thinking about summer and dry lines. The smuddler was a pattern originally tied by Greg Smith. Greg a native to Southwest Washington has used this pattern for decades locally with great success. It is the original skater that was later turned into an after dinner mint by a local fly shop owner. This fly will take fish skated, especially in boulder fields in the summer. 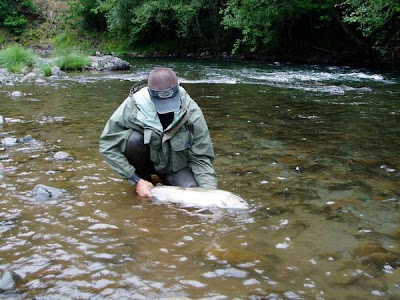 Brad Smith with a SWW Native taken on a Smuddler 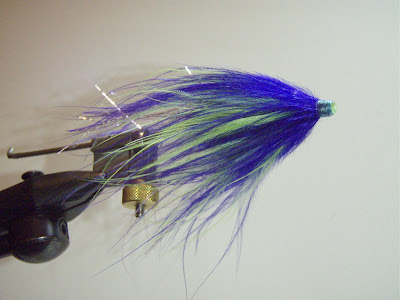 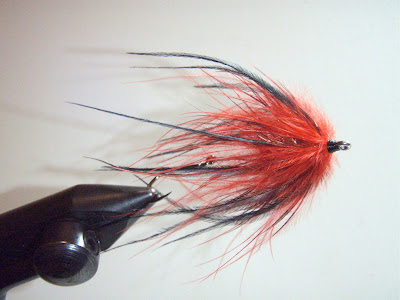 The all purpose marabou fly has been around for decades. They are a blast to tie and can be very easy, depending on how you want them to look. I like them tied with a varying contrast and bulk, providing a larger profile for winter months. I tie them using tubes or stinger style, depending on my mood and fish them with confidence. Now if I can just find a fish in this winter sea of sorrow, I would be in good shape. 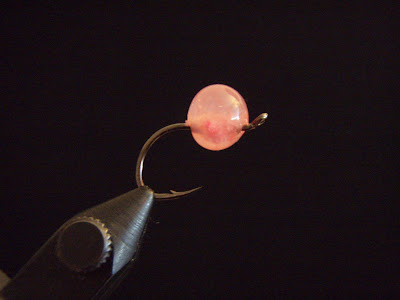 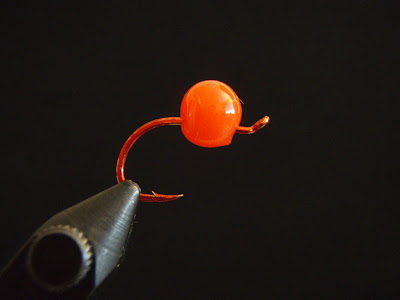 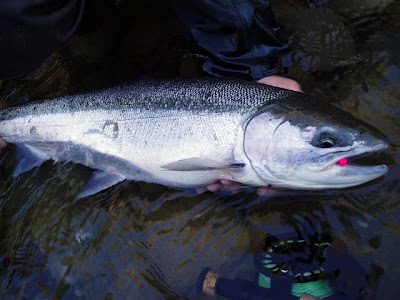 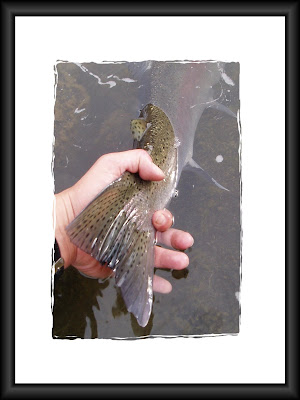 Well I finally became a member of the Wild Steelhead Coalition. The Wild Steelhead Coalition is a group representing conservationists, recreational fishermen, businesses, and citizens who seek to preserve the future of the Pacific Northwest's greatest resource. This group working in conjunction with others are vital in maintaining and bringing back native steelhead and salmon to the Pacific Northwest. The future of our fish are in our hands and this is one of the groups that can help by voicing our opinions in areas such as fishing, habitat and hatcheries. We sometimes need to step outside our boxes and look at the big picture and groups such as this can help us form rational decisions in how to look at the future of our fisheries.
Posted by Steelie Mike at 3:29 PM No comments: 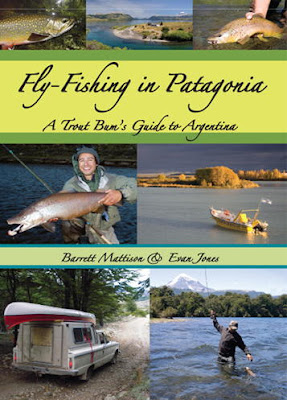 Fly-Fishing in Patagonia: A Trout Bum's Guide to Argentina just rolled out on the shelves recently. Written by my friends Barrett Mattison and Evan Jones, this book goes over the history and different regions of the country, seasons, species, flies and what to expect during your travel. It is a must read for anyone going to Patagonia in the near future. I am looking forward to reading the segments on fishing the Rio Santa Cruz for McCloud Steelhead. Yup, I said McCloud Steelhead which species originated in Northern California. Check out Fly Away Fly Fishing. 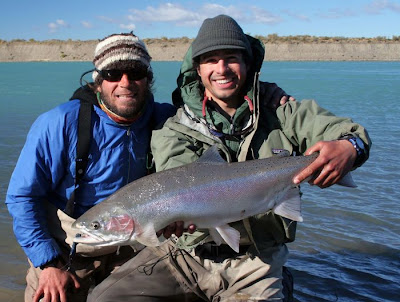 Barrett on the Rio Santa Cruz
Posted by Steelie Mike at 4:34 PM 1 comment: 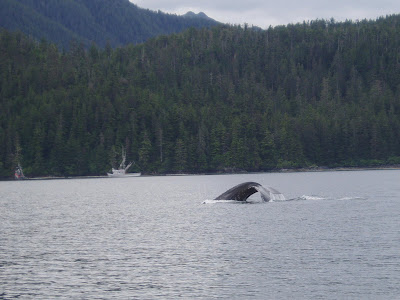 My friend Robert Craddock from Walla Walla, Washington recently send me this article from The Economist regarding the history and current ocean conditions around the world. It paints a bleak picture of our oceans future regarding habitat loss, overfishing and water temperature.
Posted by Steelie Mike at 4:08 PM 1 comment: 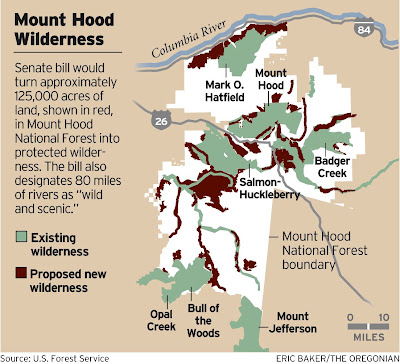 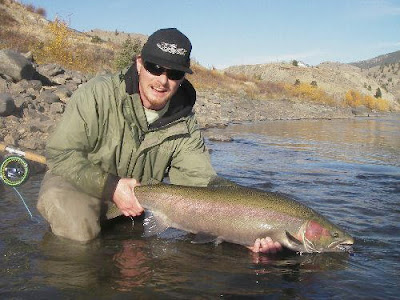 Year ago my wife and I spend a couple days in Whistler BC in the late summer. Not being snow season, it was a great opportunity to check out the community and see what Whistler had to offer. We ended up fishing with Pat Beahen from Whister Fly fishing and had a blast. I ended up catching my first ever salmon on a fly and was introduced to some weird type of casting with a two handed fly rod. I still remember hearing Pat yell and watch him jump up and down when I finally hooked that freaking sockeye in the Lilioett. Why I choose to fish for sockeye in a river with a foot of vis, I have no clue, but it was a blast none the less. Ever since I have been drooling at the idea of going back up there in the winter and fishing some of the same water for steelhead and have followed the Whistler Fly Shop since.

Pat Beahen, Brian Niska and the rest of their crew are ballers and if you want to check out Lower BC or on the way to Skeena Country, look them up. They just through down a new blog too.
Posted by Steelie Mike at 10:43 PM 2 comments: 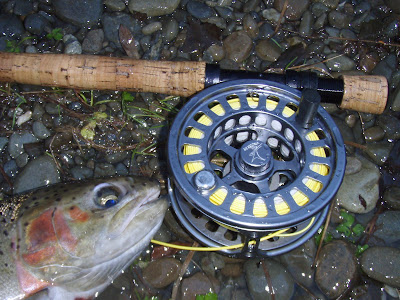 My new toy to play with this year is a Vosseler S3 Titanium colored reel. I am looking forward to using it for spey applications and possibly my next toy, a switch rod. For it's size I am surprised how light it feels and has a self-lubricating disk drag that supposed to be powerful enough to tackle tarpon. I am looking forward to testing it on albacore this summer.
Posted by Steelie Mike at 12:04 AM No comments:


Years ago on a trip to Eastern Washington I was reunited with my son I did not know I had. It was odd at first, he did not look anything like me; tall, fugly, dimples, brown hair and always smiling. I was bewildered, dumfounded and uncertain of how such a thing could happen. After a long conversation we decided to go fishing. If this boy was my minion, my progeny he had to have some kind of fly fishing skills. When we got to the first spot on the river, my boy tripped over my lab, breaking his mighty STH reel that looked as if it was drug down a road by a semi tuck. This first sign of clumsiness was an eye opener and a sign that he really could be my boy. But then a light bulb turned on when he asked me if I had duct tape. 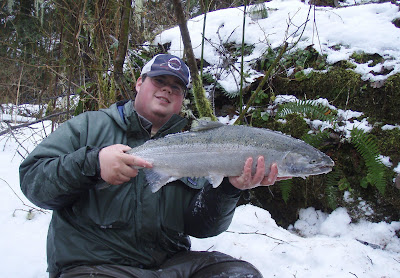 Years have past since that meeting and we have spent many days on the river. Last week he spent several days on the mighty Olympic Peninsula catching the mighty steelfaces. He called me and asked if I wanted to do a little fishing. After seeing a narrow window of hope in the weather forecast and knowing there will be a few steelfaces around a couple local streams, I decided it was a good idea. After all there is nothing more special then fishing beautifully with my boy. 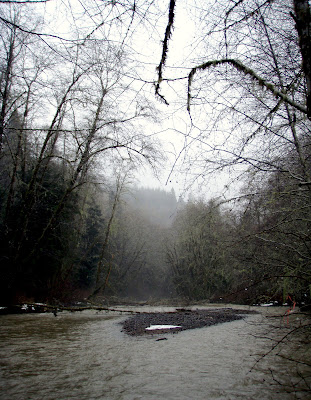 The river was off color, greenish brown with a foot of visibility one minute and then a few inches the next. The constant downpours, melting snow and wind made things a lot more fun. Since I forgot the trusty box of moose turds, bombers and smuddlers, I went for the trusty caballero egg. 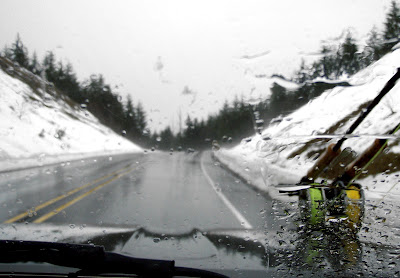 IT WAS NOT EPIC! But we caught some fish while everyone else was bitching about how the rivers were not in shape. Overall it was good times with the boy, the kid saved the hatchery puppy from drowning and the Busch Light was refreshing. I also caught my first fish of 2009! 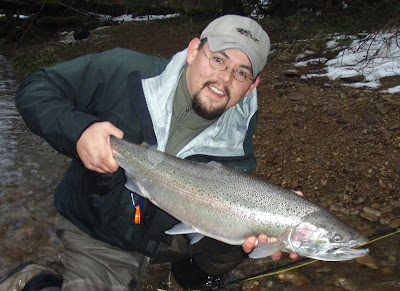 I Want to Swing the Cow 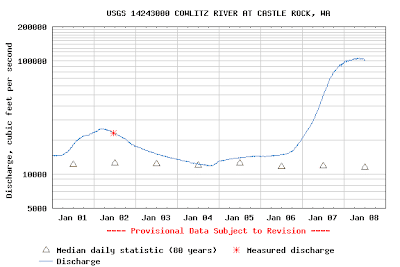 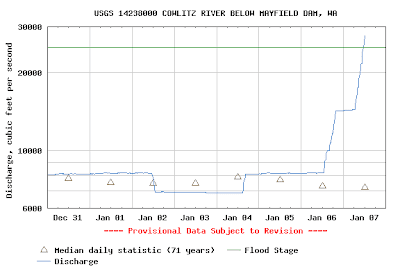 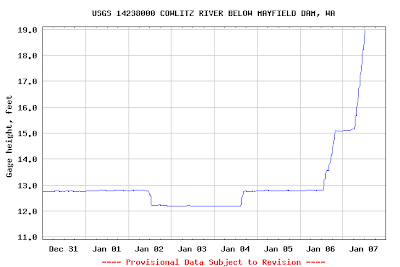 I just do not think it will be today. I hope the families living in the flood plain get the hell out in time. The high flow in the 1997 flood was 24,800 CFS while it is currently at 27,700 CFS at Mayfield Dam. I am looking forward to some new runs to fish this Spring. Flow graphs courtesy of the USGS Real-Time Water Data.
Posted by Steelie Mike at 12:25 PM 1 comment: