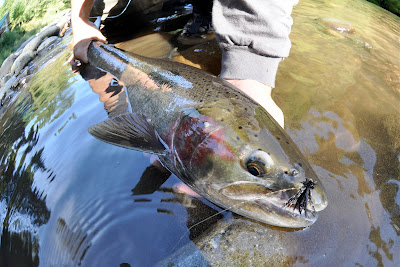 Well its been Skater time for a while now and I finally put one in the books for 2011. It doesn't happen too often on the Wet side of the state, but it doesn't mean it doesn't happen. High pressured rivers mixed with hatchery drones around highly populated areas always put skating flies on the back burner. However with the success over the years from my good friend Brad Smith, who has been fishing the local rivers since he was a kid, I have continued to give it a go and finally sealed the deal.

To my surprise while skating a riffle hitched black and purple smuddler minnow, mid-day over some overhanging trees I finally rose a fish. Not knowing what it was because I rose a few smolts in the same location, I was not sure what grabbed the fly. Over the years I have been surprised at the takes on skated flies. Some like rabid trout hungry for dinner, others sipping a bug like tricos on the Missouri, while others literally come out of the water trying to kill it. The point is I have learned to keep the faith and continue to work that fish until I know for sure what it is. This led me last year to a skated monster whitefish on the Clearwater River in Idaho, but that's another story.

Continuing to work through this little tailout below some overhanging trees I started chatting with my friend Bill that was working his way over to me. After casting a single spey, the smuddler started to skate down and under the trees. I turned my head and said something to Bill when it happened. Dammit I missed it, but the grab was solid and the fish was on. Not soon after I was beaching a bronze male hatchery fish.

Hatchery fish are not known for great fights or size, but what I have noticed over the years is that I have caught 3:1 more hatchery fish on skaters then native fish. I am sure this has to do more with East-side fish being more acclimated to their surroundings and thus relearn their instincts as trout, though this is probably bullshit since we know Jack about steelhead behavior. Then again I don't really care because this genetically retarded fish finally took a fly on the surface, on a river I have been fishing for years and though was of hatchery origin, went back into the river for the reason that it was worthy adversary.

I can't wait to get back at it and this time keep my eyes on the fly for the take. You can learn a lot about swinging flies by skating and those few takes you get every year make all that time well worth it. Do yourself a favor and give it a try, you may be surprised at what you find.
Posted by Steelie Mike at 8:57 PM 4 comments: 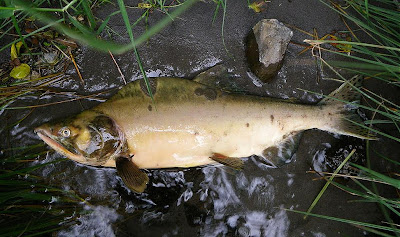 You know its a Pink Salmon year when you start to find them on rivers that they do not belong in. Pink Salmon are to salmon as Whitefish are to trout, almost always a pain in the ass unless your bored and live in the Superfund site known as Puget Sound. Now do not think I am talking smack about these mini salmon, in fact I have been well known to travel all the way to Alaska to pretty much just fish for them. These fish got a lot of heart and in the salt they are a ton of fun, especially on Miyawaki Poppers or wogs.

I remember reading years ago that these fish are well known to travel and spawn up rivers that are not from. I have seen sockeye in the Klickitat and Cowlitz, but never a pink in any of the Columbia tributaries. Pretty cool if they decided to populate a river on their own. Finally mother nature changing the ecosystem and not hatchery dropped fingerlings. Still in all reality this won't happen, but pretty cool if it did.
Posted by Steelie Mike at 1:44 AM No comments: 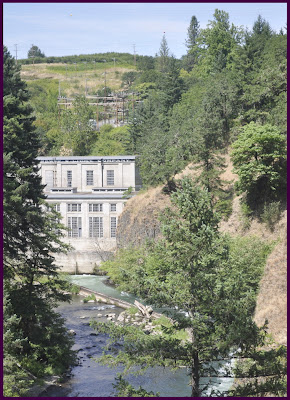 On October 26, 2011, Condit Dam on the White Salmon River will be breached. This 97 year old dam, located 3.3 miles from the confluence of the Columbia River, standing 125 feet tall will be removed, thus draining 92 acre Northwestern Lake. This breach will allow for fish passage of Spring and Fall Chinook Salmon, Winter and Summer Steelhead as well as Lamprey. There is also speculation regarding the return of Bull Trout to the watershed, but good luck finding them. It is estimated that this breach of this very non cost effective, obsolete dam will allow for increased spawning habitat for all listed species.

Although the home owners on Northwestern Lake will miss their summer hideout, mother nature will be able to take this river back. For those of you that have driven by the mouth at Underwood, Washington, the sight of derelict boats and tribal nets are not very encouraging. If you took the time to hike up the river you would see the beauty and possibility of what might return. This portion of the river that has been under water for almost a century will produce scenery that has not been seen in a decade. Only time will tell but this river could once again become a stronghold to our native fish, and at least we are now giving them a chance.

The lower section of the White Salmon River is a thermal refuge for migrating fish up the Columbia Basin. Just like Herman Creek in Oregon and Drano Lake in Washington, this location at times can hold thousands of our anadramous fish as they make there way up the Columbia during their great migration. This fishery which is more like a stillwater fishery in most of the lower stretch will change and that is not a bad thing.

I have fished this area for years in secret, though never in the stillwater portion of the lower river. The canyon walls below the dam and fast runs and pools are breath taking. The water is hard to get to and you have to put in a lot of work to find water suitable to fly fishing. Then again the fish is not the only reason why we travel to these locations. The work and effort to get to that secret pool that only the locals know about is worth every scrape and bruised knee. Now with the changes in the river planned for this October, the river that I am used to and know will change and the fishery with it. I take solace however in that it is in the good for the fish and the habitat around it.

With the removal of the Elwah dams, Rogue River dams and now Condit, we are following a precedence that hopefully will continue and help to bring back our native fish. Please continue to help advocate and fight for our native fish. What we do now matters. Read more about the Condit Dam removal courtesy of the Osprey Steelhead News.
Posted by Steelie Mike at 1:02 PM 1 comment:

PETA and our Kids

Well PETA is at it again and this time they are after us teaching our kids fishing. People for the Ethical Treatment of Animals (PETA) is an animal rights organization based in Norfolk, Virginia that sucks ass and play furry games at night. What a bunch of Patchouli Oil stinkin bitches. The funny thing is this morning when dropping the kiddo off at school I asked my daughter, "What do you want to do after school?". She said, "Can we go fishing with grandpa?". "Yes we can!", I told her.

Read more about these limp wristed bitches here.
Posted by Steelie Mike at 10:00 AM 2 comments:

Crap You See at Work 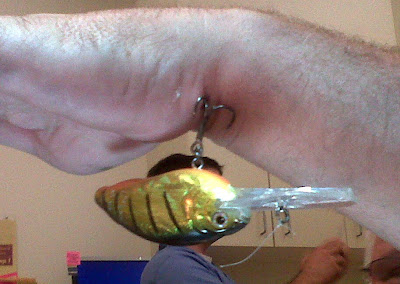 A couple weeks ago the husband of one of my co-workers walked into the Emergency Department of which I work with a special piercing. Lets just say it made it hard for me to shake the guys hand. His day of bass fishing did not turn out the way he wanted to. The winds in the Columbia River Gorge pushed his boat onto some rocks and while he tried to break free he somehow ended up with a gift in his hand. The trebles then got caught in the anchor rope and he was only able to cut himself free after another boat came by to help him a few hours later. This was by far an epic fail. Hope you all have a great Labor Day!
Posted by Steelie Mike at 12:50 PM No comments:

This Week in Pictures 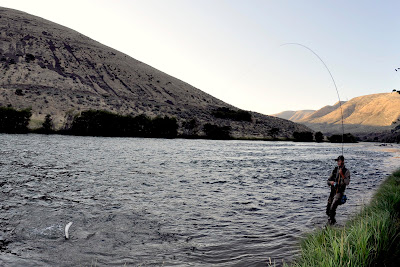 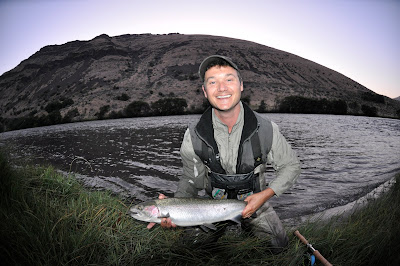 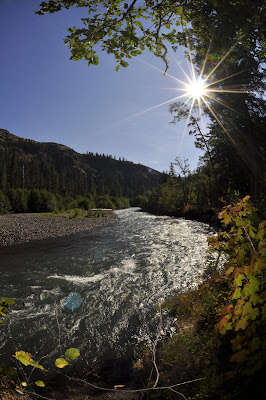 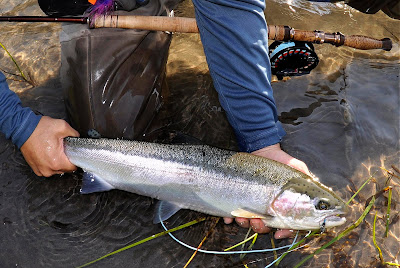 Too busy to post a report, but this last week was awesome in lots of ways, capped off with lots of dryline love and even a couple fish on the single hander. Enjoy your Labor Day everyone!